If your idea of the perfect holiday is a sunshine getaway that nourishes mind, body and soul all in one short super-break, head to the heart of beautiful Andalusia and combine a cultural city trip with a relaxing getaway. Our adults-only couples bolt-hole is a haven of calm and tranquillity, ideal for a restful few days of respite before you head off for the hustle and bustle of the Golden Triangle. Or opt instead for the city life first and then rejuvenate afterwards in the peaceful ambience here as you immerse yourselves in our stunning woodland estate with its hilltop setting and breath-taking panoramic views. In total contrast to your city stay, at DDG Retreat you will truly be at one with nature. And if you choose one of our two luxury Suites, as featured in this weekend’s Times newspaper Travel section, you can bask in a truly one-of-a-kind experience – our canvas suites come complete with marble floors, chandeliers, air conditioning, luxury furnishings and original artefacts, as well as plenty of private outdoor space and either a hot tub or plunge pool. As travel writer Liz Bird says, glamping has hit a new level!

Ranked by Lonely Planet as the best city in the world to visit in 2018, Seville is the capital and beating heart of Andalusia. Described by the popular travel publication as a ‘dazzling historical hangout’, this fascinating Moorish-influenced city is full of cultural treasures and exciting architecture which has seen it chosen as the location for many international film shoots including Game of Thrones, Star Wars and Lawrence of Arabia. Not surprisingly, the city has been selected to host the European Film Festival in December.  And that’s not the only major event happening in the city this year – to commemorate the 400th anniversary of the birth of the artist Bartolomé Esteban Murillo there is to be a ‘Year of Murillo’ celebration with guided tours, exhibitions, concerts, music and other activities including an international congress.  Seville boasts a UNESCO World Heritage site which includesthe Mudéjar Alcázar of Seville, the oldest royal palace still in use in Europe; the adjoining majestic Seville Cathedral – the world’s largest Gothic building of its kind – along with its La Giralda bell tower (worth walking to the top for the amazing views) and the nearby General Archive of the Indies. There are 115 churches in the city with a range of building styles including the Renaissance and Baroque and there is also the world-famous Plaza de Toros bullring which can accommodate a crowd of 12,000. When you’re ready for a break from sight-seeing, stroll through Europe’s oldest old quarter and stop at one of the many tapas bars you’ll find along the cobblestone lanes of the quaint Barrio de Santa Cruz. Take a trip by horse and carriage to the majestic Plaza de España, home of the Iberio-American Exposition in 1929 – or if you are feeling more energetic, explore the new cycling path network which takes you along the banks of the River Guadalquivir. And in the evening maybe take in a show at one of the city’s flamenco hotspots.  Just two days would give you a flavour of this fantastic city.

Granada, land of a thousand castles, is a vibrant energy-filled city yet it’s also close enough to the dramatic countryside of the Sierra Nevada to offer some of the best treks in Andalusia, as well as ski-ing in the winter months. Known for its grand examples of medieval architecture, the old part of the city – another UNESCO site – has grown up around the Alhambra, Spain’s most visited attraction (tip – book online in advance) that is home to royal palaces, the magnificent manicured Generalife gardens and a series of geometric pools and fountains. Tall white townhouses flank the winding streets of the Moorish quarter of Albayzín, with hand-painted tiles adorning the walls here adding a colourful touch to this charming area.  Visit at sunset and catch the music shows. Below, is the Carrera del Darro, an interesting street that follows the route of the original city walls – and with views down to the river Darro, it’s said to be one of the most romantic walks in the country. If you’re souvenir hunting, make your way to Alcaiceria where merchants would once have touted their silks and spices but where today you will find it’s full of gifts – look out for Fajalauza ceramics, hand-painted earthenware with a Moorish influence. At Sacromonte, known as the gypsy quarter, you will find 16th-century cave houses hewn into the rock-face where in the evening they come alive with flamenco performances. For its sheer scale and splendour, the renaissance Granada Cathedral which sits on top of an earlier Mosque, is a must-see. Spain’s second-largest cathedral is filled with art – gaze at the stained glass windows, sculptures and paintings on the sides. In fact, Granada is an art-lovers dream. It’s long been a magnet for artists and today there are art galleries and museums galore – and for those who enjoy street art, there’s also graffiti aplenty. As with other parts of Andalusia, tapas  (often free in bars) is the traditional fayre – enjoy the local cuisine and savour the unique ambience you will find in Granada.

Cordoba may today be the lesser known of the three Golden Triangle cities of Andalusia but 1000 years ago it was the largest city in the world with a population nearing one million people. Its heritage shows in the architecture, not least in the Grand Mosque or Mezquita, one of the greatest ever works of Islamic architecture, that still stands proud as a symbol of culture with its impressive 850 columns and majestic horseshoe arches. Wander around Cordoba and simply enjoy the buildings – you’ll be spoilt for choice.  Don’t miss the old town – famed for its patios and large internal courtyards, it’s protected by UNESCO. Peek inside the courtyard doors and discover one of the many secluded little squares. Also check out the Royal Compound of the Alcázar de los Reyes Cristianos; the Calahorra Tower Moorish fortification; the courtyard of the Patio de los Naranjos; the Medina Azahara; and the sumptuous palace museum of Palacio de Viana. But no trip to Cordoba is complete without crossing the Guadalquivir via the ancient Roman Bridge, which may be recognisable to Game of Thrones aficionados as The Long Bridge of Volantis in Series Five. Sunset is said to be the best time for a walk here when the bridge is bathed in an orange glow – and then enjoy the rest of your evening as Cordoba comes alive at night. Take a walking tour of the city in-between delicious tapas and wine at the cities selection of restaurants and bars and flamenco shows. 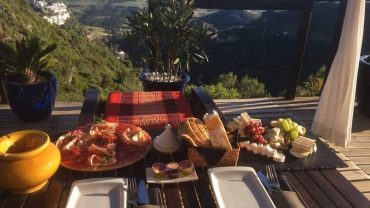 If you’re a foodie, a wine-lover, or even an avid craft beer drinker, Andalusia may not be the obvious choice for an indulgent feast for the taste buds – but we’d like to share some local secrets with you that might whet your appetite for a visit! Whether you prefer to stay close by or [...]

Ten amazing things to do in Andalusia

The romance of flamenco, fun-filled fiestas, magnificent cities steeped in history, picture postcard white villages perched atop rocky crags, breath-taking countryside, panoramic views and the lure of the ocean  - Andalusia has it all. RONDA Straddling the deep El Tajo gorge, this historic town – only an hour away – is truly spectacular. Its dramatic [...]
READ MORE ARTICLES